Can you fake a genuine smile or warm personality?

Quite by accident my wife started to listen to Brian Tracy’s ‘Psychology of Selling’ CD set I left in the car. She became intrigued by the idea 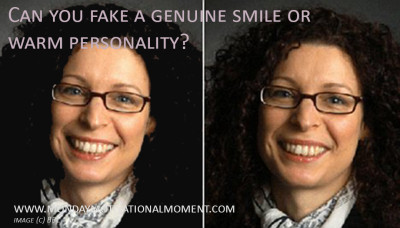 of talking yourself into a positive emotional state by repeating mantras like ‘I like myself’ over and over and every so often will text me in the morning with messages like ‘I Like Myself’ to help me start the day with a positive attitude.

A simple mantra like ‘I like myself’ repeated over and over has the surprising ability to change the way I feel about myself. I have a number of these sayings I use on a regular basis to remind me about who I am and the way I interact with others.

When actors win Oscars most often you will hear people say things like “They really caught the essence of the character”. Heath Ledger, who played The Joker in The Dark Knight, invested a lot of time understanding  the psychology of the character. His father, in the documentary Too Young To Die, revealed Heath Ledger kept a diary covering many of the aspects of what the character would be like.  In the end it seems the character overtook him and he died of a drug overdose – with much speculation around his drug dependency on his trying sleep problems following his playing this character.

Actors who do not make the effort to get the essence of a character end up in B grade movies. Their lack of effort is obvious with their audience groaning as they hear lines being said in an unconvincing manner.

To fake genuine interest in business and sales clients is a deadly sin. Like a B grade actor your client will see straight through you. We need to be like great actors; we need to live our daily lives totally immersed in the desire to care for our customers at the same time as keeping our minds focused on closing a sale.

Here is a GREAT test you can take to test whether someone is giving you a genuine or fake  smile.  It’s located at;

Most people are surprisingly bad at spotting fake smiles. One possible explanation for this is that it may be easier for people to get along if they don’t always know what others are really feeling.

Although fake smiles often look very similar to genuine smiles, they are actually slightly different, because they are brought about by different muscles, which are controlled by different parts of the brain.

Fake smiles can be performed at will, because the brain signals that create them come from the conscious part of the brain and prompt the zygomaticus major muscles in the cheeks to contract. These are the muscles that pull the corners of the mouth outwards.
Genuine smiles, on the other hand, are generated by the unconscious brain, so are automatic. When people feel pleasure, signals pass through the part of the brain that processes emotion. As well as making the mouth muscles move, the muscles that raise the cheeks – the orbicularis oculi and the pars orbitalis – also contract, making the eyes crease up, and the eyebrows dip slightly.

The more you can genuinely be interested in people the better you will feel and the better the people you deal with will feel. Being genuine with people builds relationships, builds sales and businesses.

This week, as you meet up with people, try these actions;

You will be surprised how much simpler it is to move to business discussion by being sincerely interested in them as a person. Even more, you will become a better person as you learn more about them as well.

Have a great week!

Permission is granted to reprint this article with the condition it is republished unedited and in full with full attribution to the author and the authors bio. Please provide a link to the reprint to the following email; mailto:greg.ferrett@mondaymotivationalmoment.com

Australian business and sales leader, as well as author, who brings to life the science of human behaviour and motivation. Where influencing others decisions and their behaviour is critical to success I bring new and innovative tools to make this happen. Passionate about renewable energy and creating finance solutions to help businesses implement sustainable energy solutions.
View all posts by Greg →
This entry was posted in Monday Motivational Minute. Bookmark the permalink.

This site uses Akismet to reduce spam. Learn how your comment data is processed.